You had me at 'Nativity play set' 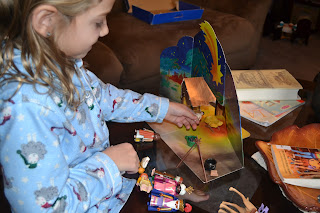 The begging has begun. PLLEEAASSEEEE...Can't we play Christmas music...watch Elf...get out the decorations? And my answer to every question is a frustrating (for the kids), "Not yet." I don't care if Thanksgiving is over; Advent isn't quite here yet. That means no decking the halls until Dec. 2, or, if we go to vigil Mass on Saturday evening, Dec. 1. And even then, I'm talking only about the Advent wreath and the Advent calendar. The tree and other assorted angels and Santas and snowmen won't show up until we're well into December.

This morning, however, Chiara came into the kitchen and began begging for the Playmobil Nativity set. After a few minutes of trying to convince me that she knew exactly where we would find it in the Christmas boxes because it was clearly in view through the plastic bin (and yet so far out of reach for a tiny 7-year-old), I caved. How can I argue with a kid who wants to play with Mary, Joseph, Jesus, and the assorted angels, kings, and barnyard animals tucked away in the collapsing blue cardboard box with them, remnants of Noah's early years.

And so I gave one tiny little inch, but I figure it's all in good time. After all, it's the Feast of Christ the King. What better way to celebrate than with childlike enthusiasm?
Posted by Mary DeTurris Poust at 8:49 AM

If you read it as her desire to meditate on the Incarnation...in an imaginative form, tailored to her needs, as Ignatius might have advised, "yes" sounds like the perfect answer!

I, too, draw the line at carols and trees and nativity scenes. Though next weekend I'll deck the mantle in greens and white lights, with dried roses tucked in, specifically for Advent.