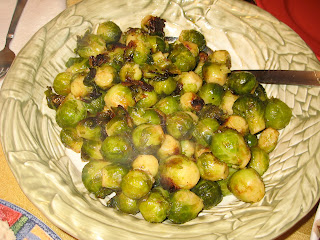 We're taking a survey at our house this morning: What's the best part of the Thanksgiving dinner?
Here's how the votes are breaking down...

Mary: Stuffing (without question). I can and will eat stuffing at every stage of the making/serving/storing process. I'll it eat half done, just right, ice cold. Nothing. Better. Than. Stuffing. (And my stuffing never enters or even touches the bird, just like my mama made it. Only better.)

Chiara: Cranberry sauce (the kind I blogged about on Foodie Friday this week.)

Olivia:  Stuffing (Mashed potatoes were a close second, but since she can have those any time, stuffing won the day.)

So, why is it, if stuffing is the most popular food on our table by a vote of 3-to-1 in various categories, there are no photos of my fabulous stuffing. I guess I was too busy eating it. I'll be sure to get a shot this year in between bites. And maybe I'll even post my recipe.

Those braised and glazed Brussels sprouts in the photo above are pretty dang good, too. Very simple recipe from Mark Bittman's "How to Cook Everything Vegetarian." If you're looking for a good veggie side, here's the recipe:

Combine butter, Brussels sprouts, and stock in deep skillet with a tight-fitting lid, sprinkle with salt and pepper, and bring to a boil. Cover and adjust the heat so the mixture simmers; cook until the sprouts are just tender, 5 to 10 minutes, checking once or twice and adding liquid as needed.

Uncover and raise the heat to boil off the liquid so the vegetables become glazed and eventually browned. Resist the urge to stir them frequently; just let them sizzle until golden and crisp, then shake the pan and loosen them to roll over. Taste and adjust seasoning. Serve hot or at room temperature. Makes four servings.
Posted by Mary DeTurris Poust at 9:19 AM

STUFFING! And mine always enters the bird... always, in a cheesecloth bag, pulled out. No one has gotten ill on my watch. Nor on my mom's - and she did not use the cheesecloth. I make what she made, and it has been this way for a long time.

Stuffing, stuffing and then stuffing. After that, maybe the turkey!

I *love* Thanksgiving so much!

Here's a question - how do you and Olivia deal with Thanksgiving? Or do you have turkey on that day?

I love brussel sprouts, but we don't have them on Thanksgiving. I could seriously eat them every single day.

I LOVE STUFFING!!! We make it both ways just like my mother did. Just made brussel sprouts tonight, but your recipte sounds much better than mine. Can't wait to try it.

Outside church after Mass, we had one vote for stuffing from someone who couldn't comment due to Networked Blogs. Don't ask.

Fran -- No turkey for either of us. In the past, we've done tofurkey, but I don't love that. This year we've decided we're happy with all the sides and nothing in place of the turkey. As long I as I have my stuffing, I'm happy. :-)

The in or out question is coming next. Stay tuned...